NASA launched the Perseverance rover into a seven-month journey to Mars on Thursday (July 30) to search for signs of ancient life and collect samples for sending back to Earth.

The last of three Mars missions this summer of 2020 blasted off Space Launch Complex 41 at Cape Canaveral, Florida on a United Launch Alliance Atlas V rocket.

The Mars 2020 mission by NASA is the third spacecraft to launch this month following the United Arab Emirates’ Hope orbiter mission launched in Japan on July 20th and China’s Tianwen-1 orbiter and rover on July 23rd.

The NASA spacecraft which will arrive on Mars by February 2021 carries the sophisticated Perseverance rover with a helicopter named Ingenuity.

Upon arriving in Mars orbit, a lander will take the rover to the red planet’s surface to an ancient lake called the Jezero Crater.

The $2.3 billion Mars 2020 program of NASA is primarily tasked to find evidence of microbiological life in the crater’s river delta which has the best conditions for life to exist in the now barren landscape. 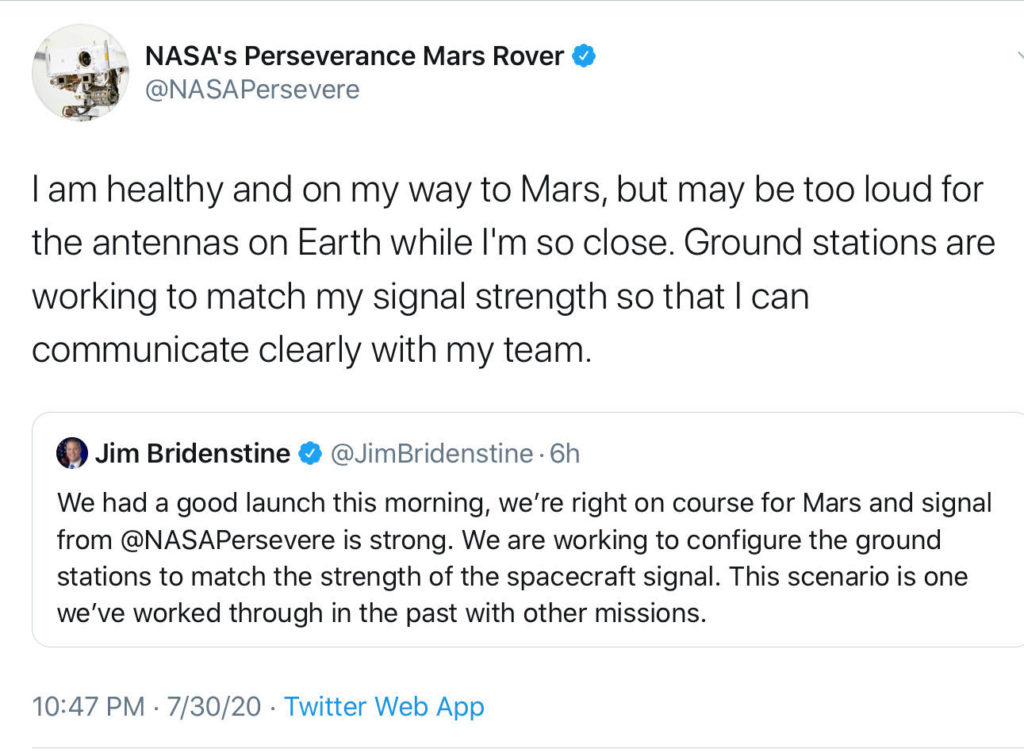 NASA Administrator Jim Bridenstine said Thursday’s lift-off begins “another historic mission of exploration.” This despite a low-intensity earthquake registered near the launch complex shortly before the spacecraft rocketed away.

“This amazing explorer’s journey has already required the very best from all of us to get it to launch through these challenging times. Now we can look forward to its incredible science and to bringing samples of Mars home even as we advance human missions to the Red Planet,” Bridenstine said in a statement.

What are the capabilities of the Perseverance rover?

The car-sized Perseverance rover is an upgraded version of the Curiosity rover equipped with a nuclear battery source, environment sensors and microphones, and cameras with zooming capabilities.

While most of Perseverance’s seven instruments are geared toward learning more about the red planet’s geology and astrobiology, the Mars Oxygen In-Situ Resource Utilization Experiment or MOXIE instrument’s job is focused on missions yet to come.

The MOXIE is designed to demonstrate that converting Martian carbon dioxide into oxygen is possible.

The experiment to be done by the rover could lead to future versions of MOXIE technology that become staples on Mars missions as it will provide oxygen for rocket fuel and breathable air.

Another highlight of the Perseverance rover is the Ingenuity helicopter which resembles a drone designed to conduct the first-ever self-powered flight in the Martian landscape.

The Marscopter, attached to the belly of the rover, will take clear and colored images and aerial views of the red planet while attempting to perform five test flights for 31 Earth days.

The purpose of the test flight is to acquire data to help the future generations of Mars helicopters and provide aerial dimension to Mars explorations.

“Perseverance is the most capable rover in history because it is standing on the shoulders of our pioneers Sojourner, Spirit, Opportunity, and Curiosity,” said Michael Watkins, director of NASA’s Jet Propulsion Laboratory in Southern California.

“In the same way, the descendants of Ingenuity and MOXIE will become valuable tools for future explorers to the Red Planet and beyond,” Watkins said.