It Is Okay to Hate Russians Says Mark Zuckerberg 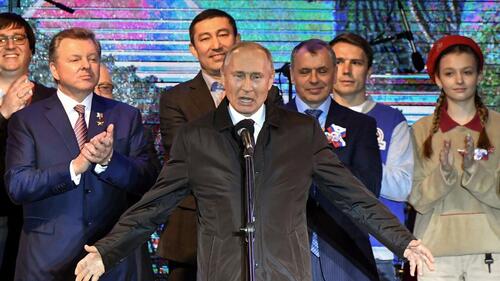 The same people who support and participate in cancel culture  are showing the entire world that racism, hate, bigotry, xenophobia and intolerance are totally fine as long as it is targeted against a group they don’t like.

The only truth in war, is that those who plan the war are willing to sacrifice the innocent to score propaganda points for their side.

There have been many instances of killing civilians so it can be blamed on the enemy. Along with the outright murder of civilians for shock value, to get one side to submit.

The Russians have been fighting to prevent civilian casualties, causing losses on their side. Which could have been prevented with massive bombing campaigns and artillery shelling. They could have also shocked the population into surrender, but they didn’t do that.

The current Ukrainian government is 100% capable and willing to sacrifice civilians for sympathy points. I’d believe the Azov battalion bombed the hospital, before I’d believe Putin did. Zelensky is dirtier than a pig rolling in mud during the summer.

And here’s Facebook/Meta allowing demonizing Russian people, because those are our values or whatever. The only reason they would announce it is if they wanted to encourage people to do it.

Australia puts its own citizens in concentration camps for refusing to take the COVID vaccine.

The same government which condemns Russia for invading a sovereign country is currently occupying Syria and maintains a military presence on all continents except Antarctica.

How progressive of them.

The Russian embassy protested, but to no avail, because of “muh private company” mantra.

☝️We demand that 🇺🇸 authorities stop the extremist activities of @Meta, take measures to bring the perpetrators to justice. Users of #Facebook & #Instagram did not give the owners of these platforms the right to determine the criteria of truth and pit nations against each other. https://t.co/1RkrjRmEtA pic.twitter.com/sTacSm4nDt

Obviously, you can’t say anything negative about “democratically elected” Zelenskiy, who was given $41 million in bribe money he stores in an offshore account by Ukrainian “oligarch” (read: extremely wealthy Jewish criminal) Igor Kolomoisky.

Before he was canonised by Western politicians and the media, Zelenskyy imprisoned opposition leaders, shut down tv stations and having vowed to bring down oligarchs in his own country, was found to have offshore accounts of his own.#Dontbelievethehypehttps://t.co/syaytuLZoZ