Lotus Eletre is here! The electric SUV has over 600 horsepower, but keeps weight under wraps

Lotus wants to introduce a rival to the Porsche Taycan and a successor to the Elise within the next couple of years.

I’m sure many of you were expecting it to be a pipe dream until the last minute, but the opposite is true. British carmaker Lotus, known worldwide for its lightweight sports cars, has unveiled its first SUV-bodied car. What’s more, it doesn’t have an internal combustion engine under the hood, but runs on electricity and also has all-wheel drive, a first for the brand.

To add to the shock, it will be the first Lotus to be manufactured in China, from where it will be imported around the world. It’s called the Eletre and customers in China and Europe will see their cars next year. The car is based on the all-new EPA (Electric Premium Architecture) platform, which will also be used to introduce the new Elise and rival the Porsche Taycan.

The 800V electric car has a battery in the floor and one electric motor on each axle. Lotus isn’t exactly specific about the technical specifications, telling us that the battery has a capacity of more than 100 kWh and can last for 600 km. It can then charge with up to 350 W. The power output depends on the version chosen, but even at base it shouldn’t be below 600 hp.

Lotus claims a 0 to 100 km/h time of under 3.0 seconds and a top speed of 260 km/h. Air suspension and active dampers will ensure comfort. Agility and stability will be provided by active stabilisers and rear axle steering. The Eletre is no slouch either, measuring 5103 mm in length, 2135 mm in width and 1630 mm in height.

It’s just a little bit bigger than the Porsche Cayenne, and its performance is on par with the Turbo version. In all markets, the car will then be able to sit on 23-inch wheels, under which carbon-ceramic brakes can be fitted. From the outside, you can recognise the Emira’s design language and the Lidar remote measurement units are an interesting feature. In markets where it’s allowed, the Eletre has camera-based exterior rear-view mirrors. 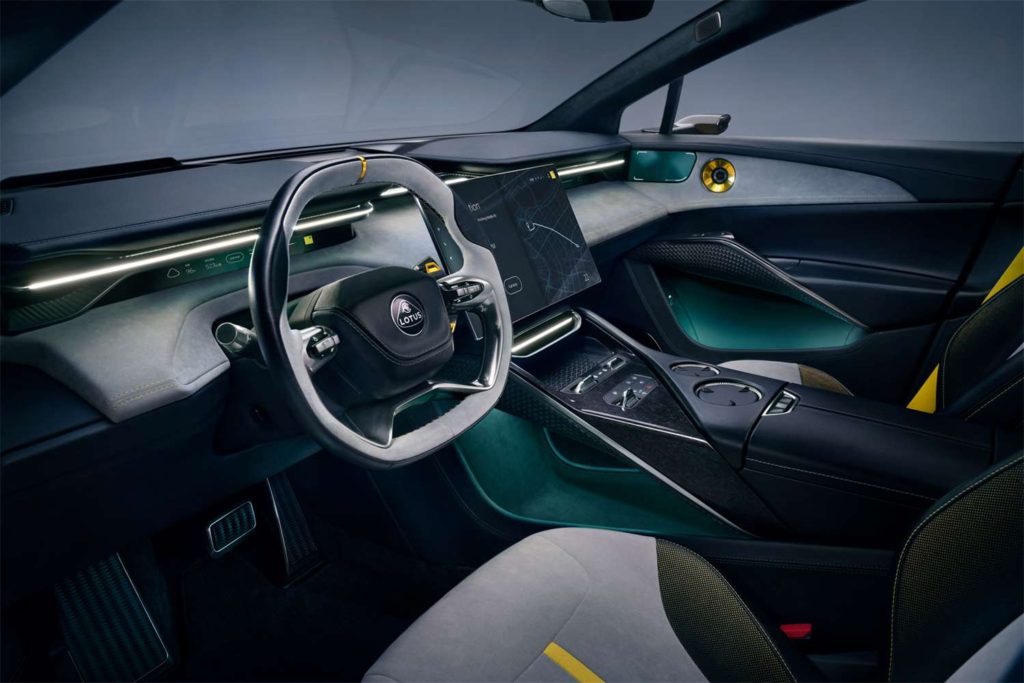 The interior is dominated by a giant 15.1-inch display in the middle of the dash. The digital instrument cluster is designed with only a 30mm-high strip. It is undoubtedly the heaviest car in the brand’s history, but the carmaker is keeping that particular figure under wraps for now. Production will begin later this year.