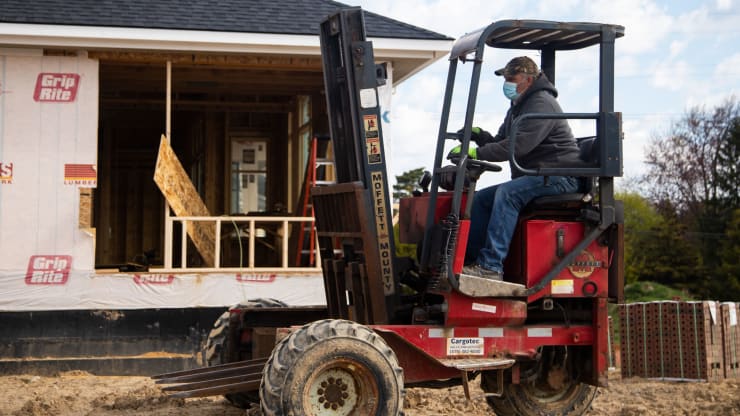 Sales of newly built homes jumped 55% annually in June, according to a monthly survey by John Burns Real Estate Consulting, which has historically mirrored the U.S. Census report.

It was the largest annual gain since homebuilding began again following the epic housing crash a decade ago. It is also the highest pace since the height of the unprecedented housing boom in 2005.

The 30-year fixed-rate mortgage is edging closer each week to the 3% mark. Freddie Mac reported that the 30-year rate averaged 3.03% this week, the lowest since the government-sponsored enterprise began tracking such data in 1971. Last week, the 30-year rate hit 3.07%, a record at the time. “The summer is heating up as record low mortgage rates continue to spur homebuyer demand,” says Sam Khater, Freddie Mac’s chief economist. “However, it remains to be seen whether the demand will continue if COVID-19 cases rise to the point that it hinders economic growth.”

Sales of new homes were strongest in the Northeast, with an 86% annual jump, and in Florida, where sales popped 84%, according to JBRC. California saw gains, but it was the laggard.

Those sales are allowing builders to raise prices. About 57% of those surveyed said they had bumped prices higher, only in California did prices pull back some. About 14% of Southern California builders reduced net prices in June, the most of any region. Nationally, home prices for new construction in June were 4.5% higher annually.

A lot of factors are helping new home sales as states continue to relax stay-at-home restrictions. Homebuilder sentiment bounced back in May. The National Association of Home Builders/Wells Fargo Housing Market Index climbed seven points to 37 this month after a record plunge in April.

Coronavirus resulted in record job losses in April, and a collapse in manufacturing output and retail sales. People backed out from buying homes as they feared blocking their money by investing in property. However U.S. consumer confidence and consumer spending improved in May, indicating that life is somewhat going back to normal.

Moreover, home-buying activity is getting another boost from record-low mortgage rates. The Federal Reserve has pumped cash into the economy to lower rates as part of its efforts to stimulate economic activity in the face of the novel coronavirus outbreak.

“There is a bias to new. When I look at the research that our teams have been doing over the last 12 to 14 weeks, people are quoting, they want new, fresh, a place where wellness features will really make sense for them,”

The fact that mortgages are at a record low during this time may also be contributing to the boom. Although, the main reason behind these record sales seems to be from the pandemic.

But as CNBC notes, while COVID-19 inspired folks to pack up and find a new home, if a second wave of the virus triggers another economic shutdown, adding to the unemployment rate, this market growth may be short-lived.