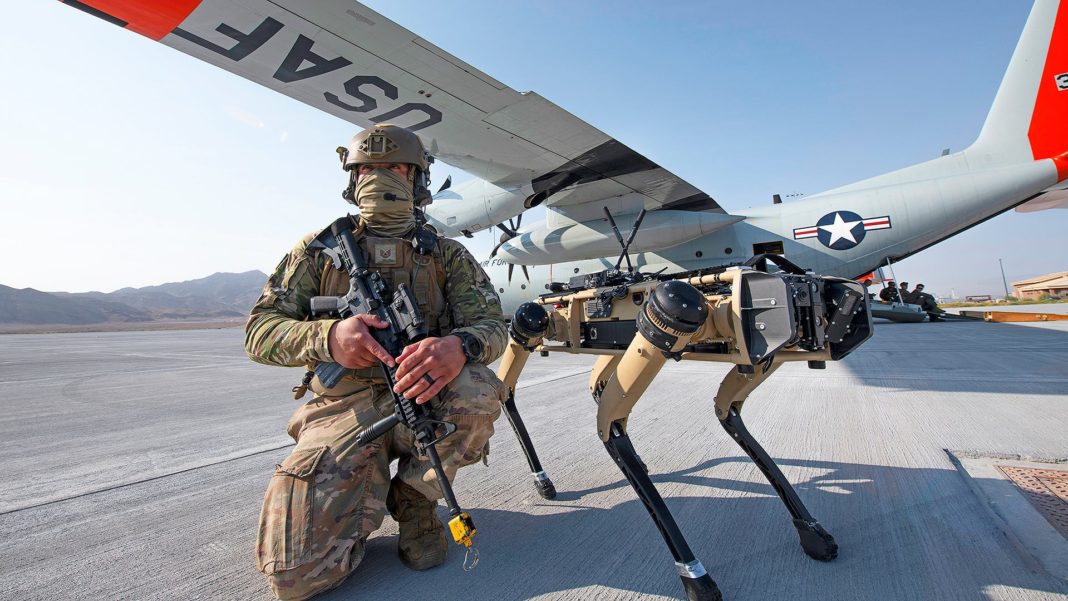 After Ford’s robot dog Fluffy, it’s time for the US Air Force to test “electric pets”, this time for base security. If you’re a fan of the Black Mirror series, the news about a robot dog being used to guard a military objective from intruders may sound like predictive programming, but here’s what reality will look like in a few short years:

The US Air Force hosted a robot-dog demo last week, showcasing their new ABMS. ABMS stands for Advanced Battle Management System, and it’s basically a digital battle network system, which is capable of collecting, processing and sharing data in real time among the United States and its allies.

The Advanced Battle Management System has been already tested earlier in 2020, and data com links were provided partially by Elon Musk’s SpaceX Starlink satellites. Last week’s demonstration was all about 5G and 4G networks being used alongside AI and cloud computing systems, working together with a high-tech SAM system used to shoot down Russian intercontinental cruise missiles.

As per a  USAF press release:

“Future battlefields will be characterized by information saturation. One of the key objectives of this on-ramp was to present a dizzying array of information for participants to synthesize, just like they would see in a real operation. This compelled commanders and operators to trust data analytics and artificial intelligence to understand the battle. Valuing data as an essential war-fighting resource, one no less vital than jet fuel or satellites, is the key to next-gen warfare.”

However, next gen warfare or not, last week’s demo also saw the US Air Force deploying quadrupedal “dog” robots, a fancy name for Ghost Robotics’ latest product, used for perimeter defense at Nellis Air Force Base.

Dubbed Vision 60, aka Quadrupedal Unmanned Ground Vehicle or Q-GV, this specific model is designed for ISR missions, remote inspection, persistent security, distributed communications and even mapping. And before you ask, ISR stands for Intelligence, Surveillance, Reconnaissance.

The robo-dogs are virtually unstoppable, and that can be a benefit or a hazard, depending on whom you’re asking. Here’s from Ghost Robotics website:

Beyond all-terrain stability and operation in virtually any environment, a core design principle for our legged robots is reduced mechanical complexity when compared to any other legged robots, and even traditional wheeled-tracked UGVs. By reducing complexity, we inherently increase durability, agility and endurance, and reduce the cost to deploy and maintain ground robots. Our modular design even supports field swapping any sub-assembly within minutes. Strategic partners can build solution-specific Q-UGVs for virtually any use-case with their choice of sensors, radios and even size the robot to suit specific requirements by licensing our reference designs.

Previous articleVolkswagen Group Is Launching A New Offensive Against Tesla
Next articleChina: Australian Journalist Detained due to ‘National Security’ Grounds