The Rittenhouse Case Should be Thrown Out with Prejudice, but It Won’t Be 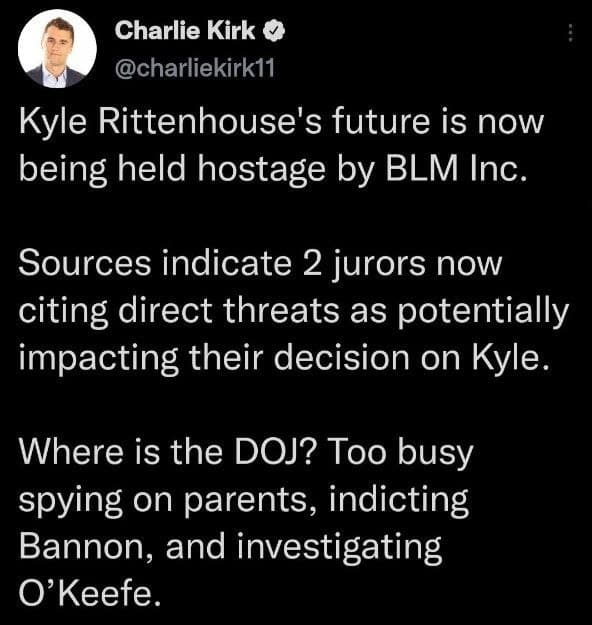 Apparently Rittenhouse’s lawyers are requesting a mistrial WITHOUT prejudice. It’s apparent what’s going on here. This is to buy time. Everyone is trying to leave the stage quickly because they’re scared to death of the consequences of a Rittenhouse acquittal or dismissal with prejudice. Everyone with any authority in this case is passing the buck.

The jury is scared to reach a verdict because their protection ends immediately afterwards on orders from DC. The judge is scared to dismiss with prejudice because of the media attacks and Antifa violence. Kyle’s lawyers want to scurry away and wash their hands of this.

They all know what this is. And they know damn well the police will stand down on orders from state politicians. Kenosha will burn. Various  attack organizations like the SPLC and ADL, and the DOJ, will go after anyone who stands against this madness.

I’m also of the belief that if a mistrial is declared, the feds are going to swoop in and put Kyle up on federal charges because “He crossed state lines!!!” Much in the same way they planned on arresting Chauvin on trumped up hate crime charges if he was acquitted in the Floyd trial.

Welcome to full on Anarcho-tyranny.

What the Rittenhouse and Charlottesville trials have definitively proven is that the legal system is broken beyond repair and will use every little dirty trick it has to deny you your rights, and if your case is even the least bit political you will not get a fair trial.

Also of note, the definition of what is and isn’t political is expanding by the day, for example, 6 months ago the concept of parental rights was a universally accepted legal and societal concept, now it has been labeled “contentious” and “extreme” by the rats in charge of our government and media complex. Eventually every trial will be too political for fairness, and that’s not decades away, that’s years at most.