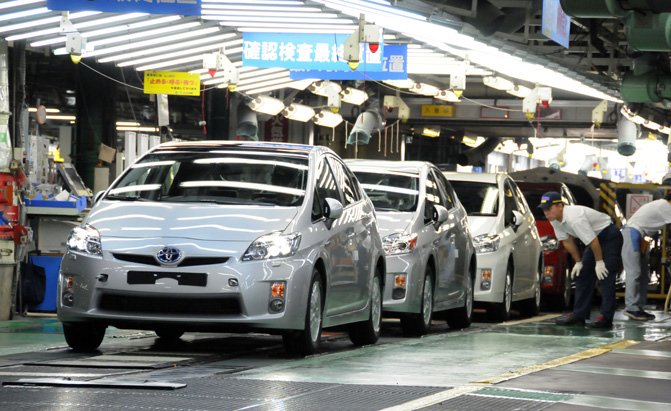 Toyota Motors cautioned that “extraordinary” increases in raw material costs might shave a fifth off full-year earnings, a clear warning that the world’s largest carmaker by sales can no longer ignore the global supply-chain crisis.

The Japanese automaker also reported a 33% reduction in fourth-quarter operating profit, sending its stock down more than 5% on Wednesday before closing down more than 4% – the worst one-day drop in two months.

Because of raw material shortages and supply chain shortages caused by the coronavirus epidemic, Toyota and other manufacturers have struggled to meet customer demand for their products.

Despite this, the corporation sold 8.2 million vehicles worldwide in the fiscal year that ended in March, up from 7.6 million in the previous fiscal year.

The Japanese carmaker also predicted that rising raw material prices will reduce operational profit by $11 billion in the current fiscal year, which ends in March 2023. It also forecasted a 21% drop in net profit for the year, to the equivalent of approximately $17 billion.

With Covid-19 continuing to be a problem in areas like China, Toyota in a statement said it would suspend operations on 14 lines at eight domestic factories for up to six days in May due to lockdowns occurring in China.

“We had announced that our global production plan for May would be approximately 750,000 units, but due to the impact of the lockdown, it is expected to be around 700,000 units,” the company announced.

The shortage of semiconductors, the spread of COVID-19, and other factors are also making it difficult to look several months ahead for the world’s number one automaker.

In a report by the Japanese daily newspaper Mainichi, affected plants by the supply chain shortages including those in Motomachi and Miyata in Aichi and Fukuoka prefectures, respectively, will be halted between May 16 and May 21, adding that it would result in a production cut of roughly 30,000 units.

The partial suspension will increase the number of Toyota factories in Japan affected to 12. The company, which runs a total of 14 factories in Japan, already said last month it would halt some operations on 10 lines at nine plants in May due to a shortage of semiconductors.

“We need to think about how we can respond to material inflation by eliminating the distinction between original equipment manufacturers and suppliers and working together as one,” Toyota chief financial officer Kenta Kon said.

“Since the price of materials is rising, we need to work to reduce the number of materials we use as much as possible and to replace them with less expensive materials.”

Toyota’s financial report announcements came as Shanghai enters its sixth week of a tightening lockdown that has made it more difficult for factories to function due to rigorous limitations on people and material mobility.

It’s the latest example of a major automaker being compelled to reduce output because to the Shanghai lockout.

According to Reuters, which cited an internal document, Tesla has also paused most of its manufacturing at its facility in the city owing to difficulty obtaining parts for its electric vehicles.

Read More Stories: Apple Pulls the Plug on the Iconic iPod After 20 Years